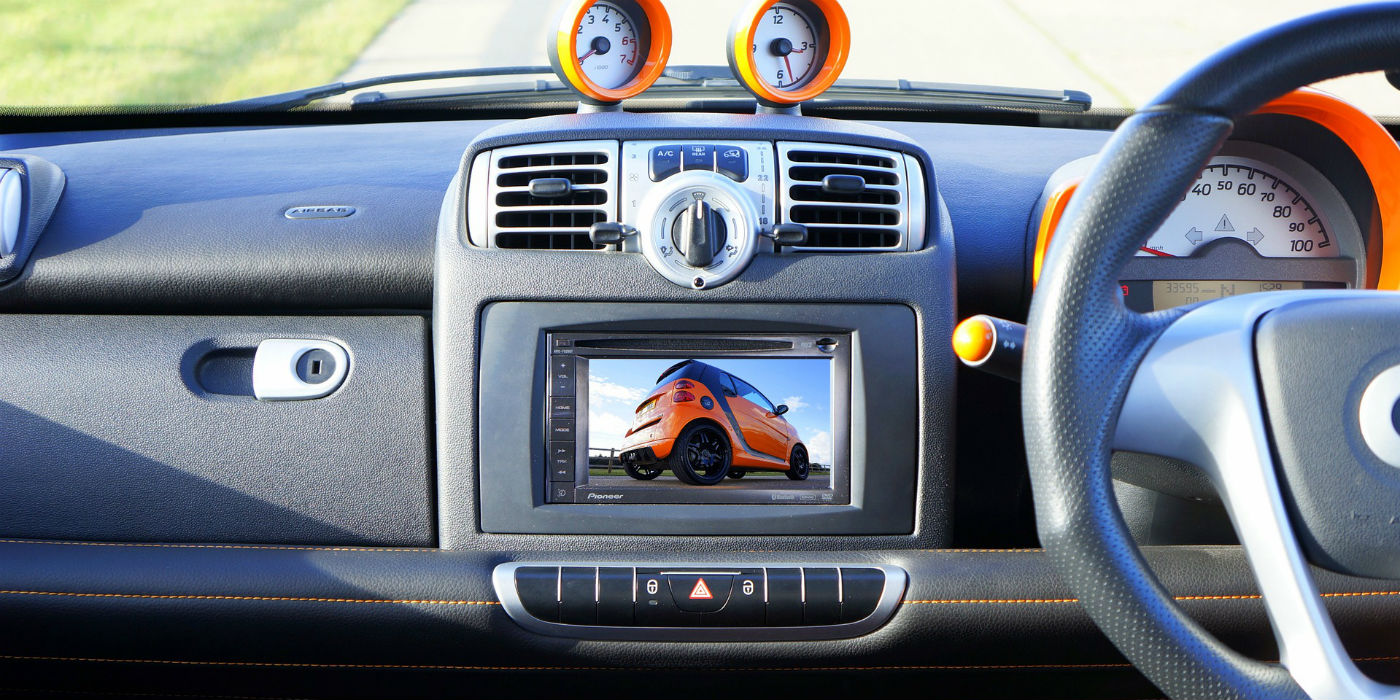 As today’s automobile manufacturers continue to strive toward more autonomous technology, the amount of data that is collected, processed and shared among the various onboard instruments.

Even the most basic level of self-driving technology requires that cars be outfitted with advanced instruments to read and understand the surrounding environment to make decisions.

Some of these tools include: 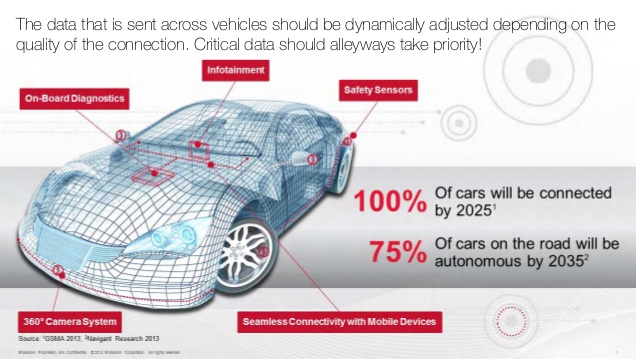 The purpose of having sensors and software assisting human drivers is to make transportation safer for drivers and pedestrians. However, the only way for this dream to come true is to instantly process data from the numerous inputs and onboard devices.

“As much as autonomous vehicles will change our lives on the road, they will also create enormous new demands and opportunities in the technology world.” -Anand Sankaran

As seen with the spread of the Internet, the real power of data is when bytes of information are shared between computers. In current day systems data is passed between computers through complex systems of routers and data centers.

One of the sources that data will be collected and transmitted is through traditional traffic equipment. Beacons and sensors will be inserted into traffic cones and other road equipment that will be able to alert self-driving cars to potential roadway obstructions.

However, if automakers want to realize fully self-driving vehicles, then they must work with technology companies to reduce choke points experienced in data centers.

As vehicles adopt different autonomous capabilities, the real value of those capabilities is to share that information with other cars and organizations.

It is one thing for the car to record the precise location that the pothole was encountered. It is another to transmit that information to a data center and to have that data shared with cars traveling in that area.

To make this kind of system possible, not only must automakers share that data through a cooperative effort, but data centers transmit and analyze that data at incredible speeds.

The only way for the future of autonomous cars to be realized is for the automobile industry and policymakers to work together to create a plan that increases the scope and capabilities of data centers. These hubs will use advanced hardware and software to keep our cars communicating with their local environment.

Not only must these data centers have the capability to receive, store, and transmit massive amounts of data, they must also do so in such a way that ensures security and privacy of that data.

Due to the load and demand of their services, data centers will rely on the cloud for many of the processes to store, retrieve, and serve data in complex and real-time environments.

2. Data Centers Will Rely On Computation

Whether sharing their surrounding environment with LIDAR or Ultrasound, autonomous cars will need to transmit the massive amount of data. In a centralized data center world, massive amounts of data will pass through data centers.

The only way for autonomous cars to communicate adequately with each other, data centers will need to store and compute all their data almost instantaneously.

Not only will data centers need to process the data, but hey will need to have the ability to scale their computational capabilities to account for peak times (rush hour traffic) along with the demands that come from a result of one-off events like local sports games, etc.

3. Data Centers Must Be Interconnected

Unlike in today’s automobiles, the lives of drivers and pedestrians will rely on the bandwidth of data centers. Even the slightest latency in data transfer and processing could result in damage to persons or property in the vicinity of driverless cars.

The reliance on data to ensure safe operation of autonomous cars is one of the things that makes many skeptics concerned about their future. If the auto-tech industry is not able to figure out how to continually retrieve, send, and analyze the floods of data that is produced by the interconnected vehicles then the future of autonomous vehicles could be in trouble.

Security & Management Of Data Centers Must Be Perfect

While the onboard technology for autonomous cars is quickly advancing, data center communication technology has been falling behind.

Instead of focusing on the supporting structures and systems that will provide the backbone of self-driving vehicles, the automobile industry has been fixated on their cars and their technology.

However, this shortsightedness could catch up to the sector as a whole and prove the last “straw that will break the camel’s back.” If a data center fails to transmit or analyze data accurately and that mistake results in a 10-car pile up then the entire system will come under strict scrutiny.

The physical and cyber security of every data center will need to be next to impenetrable. Data centers will also need to find ways to conserve energy.

Their giant computer banks that process petabytes of information each day will require enormous amounts of electricity. If the data in the data centers and the power structures for those data centers isn’t near perfect, then the entire system risks catastrophic failure.

At the 2017 Consumer Electronics Show, Microsoft announced that they would be powering auto manufacturer to create customized and scalable driving data solutions.

The autonomous car market is as diverse as it is intriguing. While some companies like Tesla, Ford, and Volvo have cornered the manufacturing of automobiles, other companies like Google are working on perfecting how onboard instrument work.

Microsoft is working to address the looming issue of data centers and connectivity of future vehicles.

Microsoft has taken the approach of a flexible platform that is built on their Azure cloud. Microsoft’s approach to the autonomous car industry is entirely different from other businesses because their revenue model is based on coordinating and organizing data sent through data centers and between vehicles. 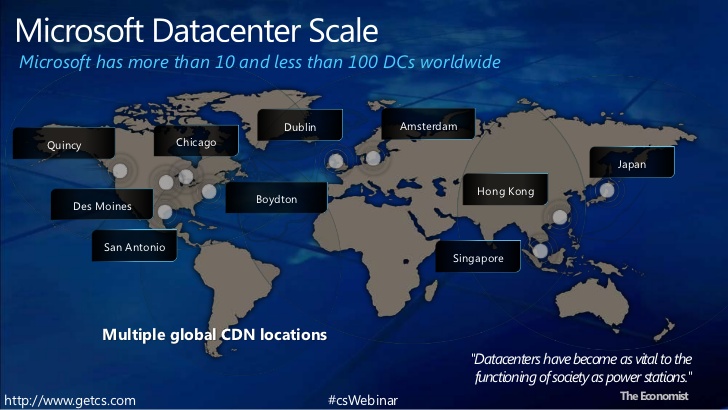 As one of the largest investors in cloud technology, Microsoft is looking to help automakers and suppliers from the 200 services offered across their 38 global data centers. These data centers are the perfect fit for the autonomous car industry because they have extensive security and global compliance for privacy regulations. My Microsoft entering the independent industry

Meeting the needs of automakers and demands of customers is going to be the focus of Microsoft moving forward in the autonomous car industry. Microsoft is now a newcomer to working with large companies in a dynamic business environment, as they have a portfolio of about 85% of Fortune 500 companies who already rely on Microsoft’s cloud services.

Ultimately, Microsoft’s data centers will ensure they are a key player in the future of autonomous cars. As more data becomes available and their data centers analyze that data, they will be able to drive sophisticated machine learning, artificial intelligence, and advanced mapping services.

While the future of autonomous cars is bright, current technology and data systems could be the primary constraints for full adoption. The sooner policymakers, automakers, and technology leaders like Microsoft work together, the sooner we can reach the goal of no traffic-related deaths and safer streets.

If self-driving vehicles enter mass production in 2020 as is expected, automakers and technology companies only have a few years to iron out the remaining unknowns surrounding information concerns. The coming years will be the defining period for the autonomous industry. Once data issues are addressed the public will be more open to welcome the emerging sector!