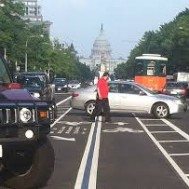 On October 30th, DDOT pioneered the product in the U.S.

Instead of a large physical obstruction, Zebras impede moving tires making it difficult for cars to cross into the bike lane. Many question whether such a low-profile solution will be effective in the United States, where cycling is still widely regarded as novel.

As expected, some drivers are ignoring the visual cues, a recent article on dcist.com points out. #BikeDC reveals SUVs driving right over the seperators. While the pictures might be discouraging it’s important to remember that these cars are forced to slow down – they can’t just swerve into the bike lane or steal a quick turn with Zebras in the way.

In some cases, the safety tool has even caused cars to get “stuck” without causing damage and that might be the best possible outcome for a car that ventures into the bike lane.

So far, DDOT has installed 34 Zebras to the 1200 block of Pennsylvania Avenue. Over the next several months they’ll record how the lane blockers affect crash data and alter design plans accordingly.

Pennsylvania Avenue may be the perfect petri-dish. The 8-lane highway is stuck with an increasingly popular, but dangerous piece of cycling infrastructure. The bike lane is in the center of the highway––as opposed to the boundary––giving cyclists a roomy 16-foot-wide path, uninterrupted by bus stops and other peripheral activities.

Still, the tirelessly popular freeway––which borders the Capitol Mall––is a hot-spot for tourism. Cabs and other vehicles frequently make U-turns in order to reach passengers without taking lengthy trips around the block. To do so, they cross right through the bike lane. Three years since the DDOT added the infrastructure, ridership has doubled but accidents have tripled––32 bike accidents were reported in less than three years. Some cyclists say they avoid the bike path altogether.

And U-turns aren’t the only issue. Cars are also known to park in the center bike lane and pedestrians crossing into the median don’t

“We moved the bike lane into the median because it would have less effect on traffic,” says Mike Goodno, Bicycle Specialist for DDOT. “Because we had the available space we thought it would be less impact overall. We moved it there knowing we might have some issues––certainly with pedestrians.”

Traffic laws now prohibit U-turns along Pennsylvania Avenue––punishable by hefty fines––and the agency has held several enforcement campaigns. They’ve added signs to traffic signals and worked directly with the Department of Motor Vehicles (DMV) and the taxicab industry to spread the word. Still, U-turns have continued.

Zebra lane seperators are flexible and durable so they’re safe for cars. At the same time, the edgeless, ridged surface makes it impossible for cars to cross over swiftly. Even drivers that choose to ignore the reflective stripes encounter friction and are forced to slow down.

By adding Zebras, the DDOT hopes drivers will finally get the message. The safety measure took the DDOT just two hours to install. During the next inauguration ceremony, DDOT can remove the bolted Zebras to make room for crowds. In fact, the Zebra installation plans were approved by The U.S. Commission on Fine Arts, in part, because the sleek design helps maintain the roadway’s aesthetics.

“Zebra was attractive because we can put it in fairly quickly,” says Goodno. “It’s a very low-profile device.”

Yet, the DDOT’s design plans have still been questioned by dsict.com, Greater Greater Washington and other D.C blogs. Some believe the agency is neglecting manufacturer advice by adding delineators every 15-feet instead of the recommended 10-foot spacing. The DDOT has also chosen to put the product inside the surrounding “buffer” area and not at the outermost edge, and has aligned them vertically––instead of diagonally––with traffic lines.

Goodno claims the modifications will help keep bikers from hitting the Zebras. “We wanted to provide as much space as possible to the bikers,” he says. “We decided to put them centered and straight so they’re parallel with traffic. I think they’re quite visible that way.”

Furthermore, by staggering Zebras on both side of the bike lane, Goodno says cars can’t crossover the bike lane without hitting a blocker. DDOT hopes the arrangement will save money and allow them to maximize the use of Zebras along Penn Ave.

“If we find that we’re still getting a lot of U-turns we can modify it,” he says. “We thought we’d start and see how this works.”

Despite apparent safety risks, the bike lane at Pennsylvania Ave has grown popular, making it difficult to disbar. The DDOT must find a way to increase safety without changing the structure.

It’s a persistent issue for the agency, which is tasked with increasing the city-wide cycle transport to 5 percent by 2015 all while decreasing accidents. By 2032, ridership must rise to 25 percent in order to meet the goals laid out in Mayor Vincent Gray’s A Vision for a Sustainable DC.

Goodno says Zebras can help them get there. Upcoming infrastructure projects include adding concrete median strips and cobblestones to make designated roads more bike and pedestrian friendly. Yet, to avoid another bike lane debacle, they want to test new designs before they commit.

“Zebras and flexible posts are ideal for the interim,” he says. “They’re low cost and they can be temporary. A lot of these projects we want to test for a little while and make sure we have everything correct before we build it permanently. If this works out well we probably will use Zebras in other areas of the city.”