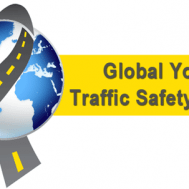 It’s no secret that teenagers are posing a greater risk behind the wheel.  After all, various states implement different degrees of Cinderella licenses, and the growing problem of texting while driving is also making the road a little more dangerous. That’s why teenage driving awareness is an important mission in this country.  May is National Youth Traffic Safety Awareness Month, and there are plenty of things happening around the country to spread awareness. This year’s National Youth Traffic Safety Awareness Month is a particularly important one.  Teenage driving fatality statistics are staggering. In 2011, July 23rd and July 30th tied for the deadliest days for young drivers behind the wheel: Teen driving fatalities has become a health epidemic in The United States, causing up to 3,500 deaths a year.  All of these statistics have opened the eyes of Washington officials, and they’ve seen the need for education and traffic safety awareness in the country. That’s where National Youth Traffic Safety Awareness Month comes in.  This month long celebration doesn’t just reach the ears of American youth.  The National Organization for Youth Safety has partnered with the government, corporate leaders, and young people also launch Global Youth Traffic Safety Awareness Month. The goal of Youth Traffic Safety Awareness Month is to raise awareness about the importance of good driving—especially as we enter the summer months.  According to the National Highway Traffic Safety Administration, Memorial Day is the start of the deadliest time of year for teens on the road. Over 1,000 young drivers die in traffic accidents during the summer months compared to 800 deaths in the non-summer months.  So, May is the perfect month to begin a traffic safety campaign. To promote Youth Traffic Safety Awareness month, the National Transportation Safety Board is rolling out an informational campaign.  The Ad Council started an outreach program in Teen Vogue magazine. AT&T has even developed an “It Can Wait” program encouraging young drivers to wait to read text messages until they’ve arrived at their destination. The US Department of Transportation, Mazda Motorsports, the Ad Council, and The National Organization for Youth Safety had their second annual “Project Yellow Light Scholarship” contest, where entrants developed and produced short videos showing the dangers of “risky mobile behavior on our Nation’s highways.” The project’s theme this year was “One Text or Call Could Wreck It All.” What’s the hope for this year’s theme?  That peer-to-peer anti texting messages have a greater reception than  adult-to-teenager communication.  Teenagers tend to listen to one another, rather than taking advice from parents or teachers. The Century Council and 17 Attorneys General across the US released PSA’s for their “IKnowEverything” program.  This program encourages a dialog between teens and parents when it comes to safe driving.  In this particular PSA, Attorneys General encourage parents to talk to their kids about the dangers they face on the road, and encourage them to pay attention 100% of the time. It’s great to see so many education/awareness programs scattered throughout the globe encouraging teen driving safety. Yes, teens may think they know everything—but they need to be aware that they are rookies on the road.  Hopefully, National Youth Traffic Safety Awareness month is the first step to a safer driving environment for old and young drivers in the coming summer months.     Image Source: The National Organization for Youth Safety, http://www.noys.org/gytsm_history.aspx
(Visited 519 times, 1 visits today)
Older Posts