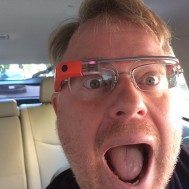 Although it hasn’t even come out yet, lawmakers already have their sights set on regulating Google Glass when it comes to driving.  They’re worried that this exciting futuristic device will add to the already growing technical distractions that plague drivers today.  Google has reassured it’s customers that it’s product can enhance the driving experience rather than hinder it. The question is, can officials regulate something that hasn’t technically been fully invented yet? Presented to the public a little over a year ago, Google Glass started popping up on the internet as well as television ads– promising a new leap in the technology age.  We probably won’t see this officially released until 2014, but there is still plenty of theories on what we can expect.  Google Glass acts as a personal head mount display that creates virtual screens you can see right in front of you. Exactly how Google plans to utilize this technology has yet to be seen.  The current version of Google Glass uses a prism placed just over the wearer’s right eye.  The prism has a mirror and beam splitter that translates the projected image into a display that can be seen with the human eye.  Google Glass still has plenty of room to grow.

Some people have suggested Google explore holographic wave-guide optics, a process where light is “squeezed” into a window directly in front of the eye, and is then “released” to create an image you can see.  Another method involves drawing images directly onto the wearer’s retina, which sounds a little to Sci-Fi for my taste. But what does it mean to have something projected directly into your line of vision? Will you be able to go about your day to day activities without being distracted by the data that is constantly being presented to you? A 2010 National Safety Council (NSC) report states that 21% of all car crashes involved people talking on handheld or hands-free cell phones, and at least 160,000 car crashes involved texting.  In 2012, the NSC estimates that a crash involving drivers using cell phones and texting occurs every 24 seconds.  With these staggering statistics presented before us, you might agree that banning Google Glass while driving is a good idea.  Google, however, is trying to convince us otherwise. Essentially, Google Glass is being presented as the “hands free device” for your eyes.  Likewise, Google Glass could be the type of technology that could provide an “enhanced driving” experience which could actually create a safer driving environment.   In fact, a Google Glass-powered GPS could put navigation information directly in-front of you.  That way, you wouldn’t have to look away from the road when you’re getting directions.  The whole concept behind Google Glass is to eliminate the need to look down at your smartphone; something that takes your attention 100% away from what you’re doing. Still, people like Gary G. Howell of West Virginia is determined to stop Google Glass from getting on the road before it’s even released to consumers.  He’s introduced a bill that forbid texting-while-driving, as well as prohibiting the use of “a wearable computer with head mounted display.”  That sounds a lot like Google Glass, now doesn’t it? Of course the main purpose of this bill is to protect young new drivers, but can a 16 year old even afford the $1,500 price tag?  Before jumping to legal conclusions, shouldn’t there be case studies designed to address this particular question?  Why does Gary Howell think he can regulate something that hasn’t even been introduced to the public yet? Instead of pointing fingers and drawing conclusions Google should work with legislation to reassure  the public that the addition of Google Glass to a driver’s experience is more beneficial than harmful.  The product hasn’t officially been released yet, so there is still plenty of time to ease safety concerns and improve the product further.  What do you think?  Will you be purchasing Google Glass, and if so–will you be driving with it?   Image source: Robert Scoble on Flickr, http://www.flickr.com/photos/scobleizer/
(Visited 397 times, 1 visits today)
Older Posts