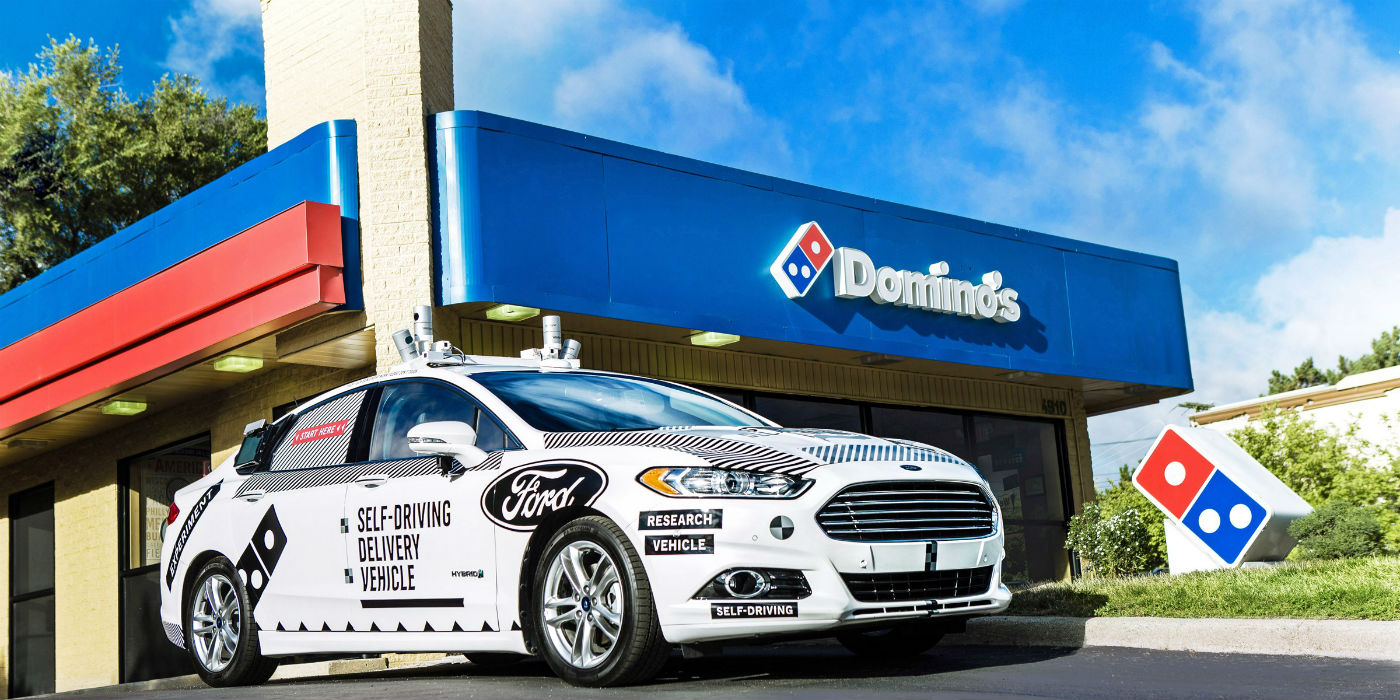 Ford Motor Company and Domino’s Pizza have teamed up to launch a test run of autonomous delivery cars in select cities. Leading the way in this new innovative technology the two Michigan based companies sent out their first test car in Domino’s hometown of Ann Arbor.

After testing and positive feedback, autonomous deliveries were expanded to other cities including Miami and Las Vegas. The customer response thus far has been positive, and the success of this campaign has made many industry experts wonder whether Ford and Domino’s might be leading the way into a future of driverless cars.

The Ford Fusion is the car of choice being used for this experiment, and each vehicle is equipped with self-driving technology and sensors that aid in navigation and information collection.

Each car is also outfitted with iPad technology to assist with communication between customers to help in the delivery process, and each vehicle has advanced autonomous car technologies to help them arrive at their destinations safely and efficiently.

Many customers have reported that the entire experience is straightforward and easy to understand. During the ordering process, qualified customers are asked to participate in the study when ordering online, and the car texts them when it arrives at their designated location.

As the car arrives at the desired destination, the customer will come out to meet the vehicle and remove the pizza from a particular window box which is designed to keep it warm during the drive.

To oversee the test deliveries a human engineer is in the car during each delivery. The human occupant is hidden behind dark windows so customers can not see them as they retrieve their pizza, and the human occupant is there to ensure the safety and accuracy of each order while watching how the onboarding technologies react in real-world situations.

There are, of course, certain aspects of the delivery service that the company is most interested in receiving feedback on.

Despite the need for study and development the President of Dominoes, Russel Weiner, is thrilled about launching a fleet of driverless delivery cars around the globe.

“We are delivery experts. This is where the industry is going”, Weiner commented.

The company is confident in Ford’s technology and feels that they have what it takes to be a leader in the industry.

From being the first pizza delivery company to allow customers to order online or the Domino’s Track, Domino’s Pizza has lead the industry in technology and delivery methods for years. Having an autonomous car delivery pizzas is a logical next step, but this is an ambitious step, to say the least.

There is still a great deal to learn about the public’s response, not just to driverless delivery cars, but to autonomous vehicles as the new and best way for modern road travel.

Consumer studies have shown that many people are not keen on accepting the presence of autonomous cars on public roads. They are concerned about safety and the feel uncomfortable giving full control to a machine, and there are questions about how autonomous car coding will make crucial decisions.

But, car makers argue that allowing a machine to drive is precisely the reason autonomous cars are safer than human manned vehicles. Most accidents that occur today are a result of human error.

Robotic vehicles will be free from these errors and will be able to navigate more safely and more efficiently. And, if we lived in a world where all cars were driven via a computer and not humans, then the accident rates should dramatically drop.

Even tech-loving millennials and those who are usually excited about the latest and greatest in smart devices are feeling wary. Having a city built with smart technology will help Domino’s complete their grand vision of driverless cars around each city delivering fresh pizza. If Domino’s can work with emerging cities to integrate smart infrastructure then they will be able to use those tools and sensors to make safer and more efficient deliveries.

It seems then that public opinion is a significant hurdle for the driverless car industry to tackle. If they cannot get the average buyer to believe in the technology the success of autonomous cars will plunge.

“This is a society that needs a reason to switch and give up the wheel. Many people prefer to feel in control and do not want to be “along for the ride”’.

Maybe if automakers can market the car to appeal to modern man’s need for less stress, solutions for big problems, and time-saving techniques they can succeed.

After all, self-driving cars would provide more time for people to sit back and read a book or take a nap while the car is driving itself without any human input.

Autonomous cars have also been shown to have less impact on the environment and, since they are operated in a centrally controlled system, they can get people where they need to go in the fastest time possible.

Maybe most important, these self-driving cars could potentially help the elderly and others who cannot drive find new freedom to travel.

But, for now, the world is still trying to catch up with technology, and they have legitimate concerns about these new ideas. They need to know they are safe and secure and will provide a better life.

Making a car that is approachable and that brings cheesy goodness a brilliant idea for marketing this new machine and making it seem a little less scary.

This may not have been Ford’s goal in this pizza endeavor, but it will surely be a side effect.

As companies continue to test delivery cars in their given field further, the world will slowly become more familiar and less hostile towards them. Companies, like Ford, will have the chance to rise to the standards of the consumer or fail. Getting more cars on the road is critical.

Either way, it seems inevitable that Dominoes and Ford are leading the way into a new era of autonomous driving.