Are you ready to trust computers and connected cars with your life? 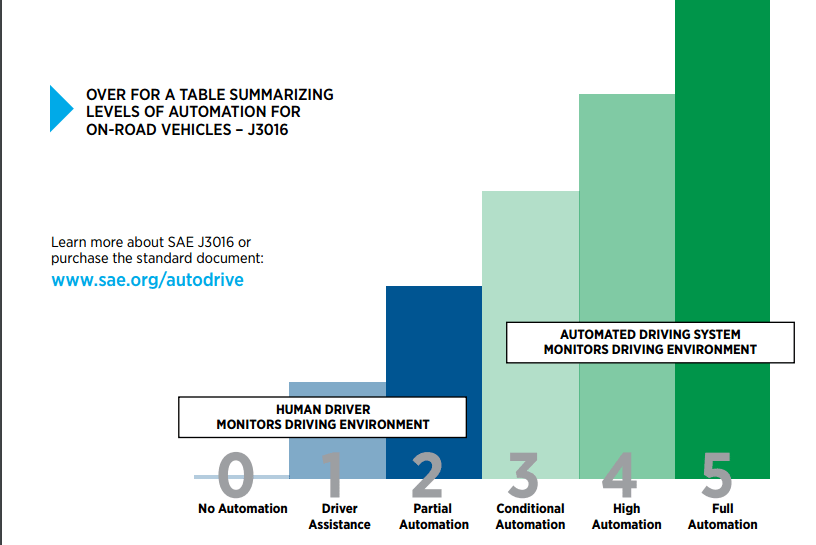 TechTarget has an extensive article on the topic, and the Society of Automotive Engineers (SAE) has a helpful chart. Below are a few highlights of the levels.

Level zero: The human has complete control over their vehicle including the steering, breaking, and throttle. Essentially the way driving is done today.

Level one:  Small elements of driving such as braking can be done automatically by the car.

Level two:  At least two functions are automated such as lane centering and cruise control. In this phase the driver can have their hands off the steering wheel and foot off the pedal, however they still must always be ready to take control.

Level three:  Although the driver is still present at this level, they aren’t required to monitor the environments around them as much as they would in previous levels.

Level four:  According to the Department of Transportation (DOT), vehicles at this level are “designed to perform all safety-critical driving functions and monitor roadway conditions for the entire trip.”

Level five: This stage simply means that the vehicle is fully autonomous and has no steering wheel or general controls for a human to use. The full details of these standards can be found in SAE Standard J3016.

Trends and Strategy for Manufacturers

According to a report by McKinsey a progressive scenario of autonomous car technology could mean ~50% of passenger vehicles sold in 2030 will be highly autonomous and ~15 percent of all vehicles will be completely autonomous. 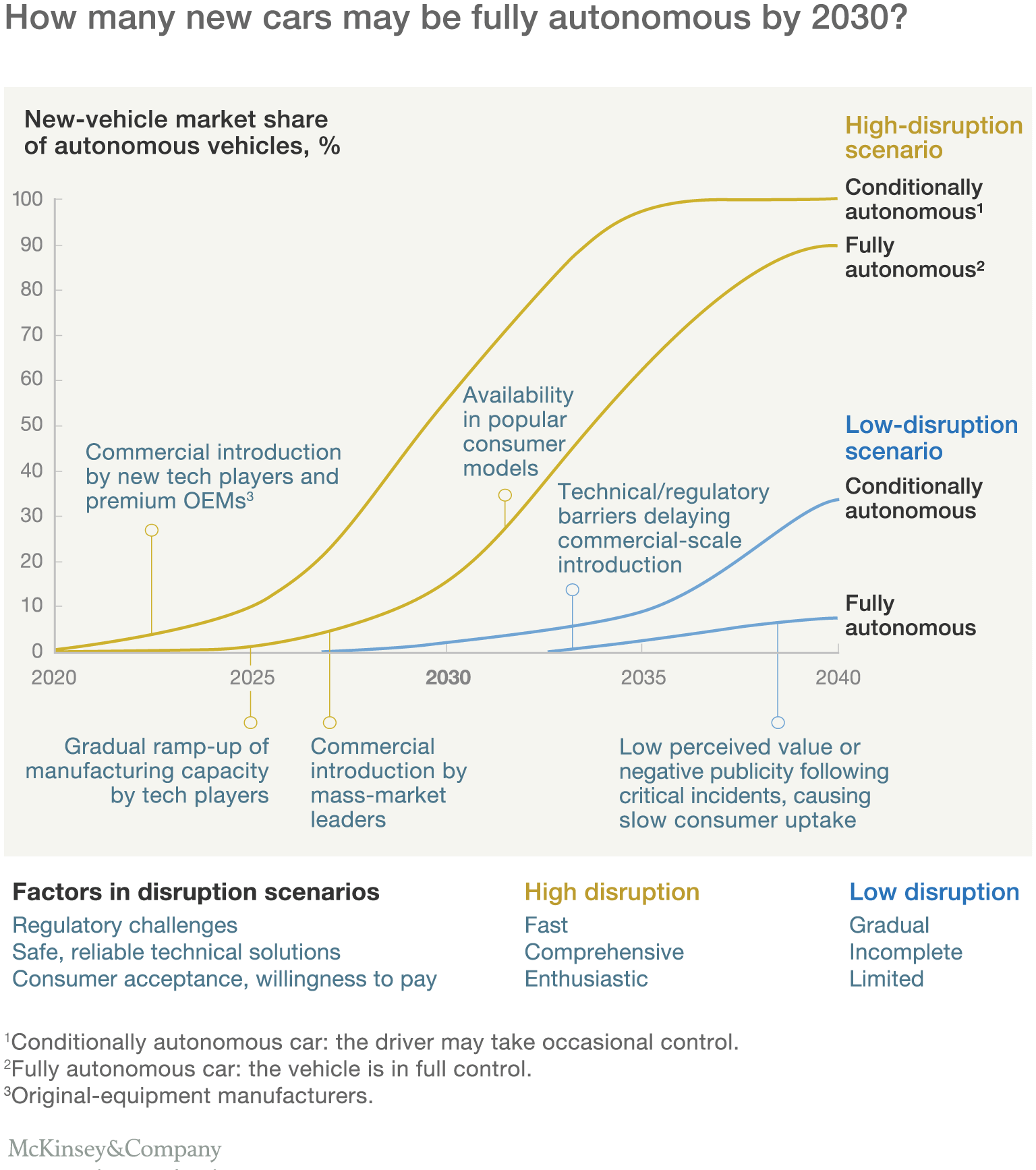 Between now and then, advanced driver assistance systems (ADAS) are going to be essential for consumers, regulators, and corporations to develop guidelines around autonomous car technology and how they interact with modern traffic equipment and safety cones.

The previously mentioned McKinsey report outlines a few strategic priorities which automotive players should focus on in the coming years. Big picture thinking and preparing for uncertainty is going to be essential because the autonomous revolution is about more than engineering cars; it’s also shifting the way people live their daily lives.

Partnerships are another key element because autonomous cars are bringing about a connected ecosystem. Manufacturers need to focus on sharing the costs of electric and autonomous vehicle technology and the necessary infrastructure. Not just a focus on B2B logistics, there also needs to be joint efforts to educate the public on the benefits and power of the technology.

Regardless, even with advances in regulations and safety technology, there’s still a few ethical dilemmas which likely won’t be overcome anytime soon.

“Would you let your car kill you for the greater good?”

That’s just one of the many questions consumers and engineers are asking as they develop their technology.

New Atlas for example mentions the driverless dilemma where a car would sacrifice the driver in order to save the lives of pedestrians. In this situation it’s not just an either or decision because swerving off the road might not always lead to the driver being killed. Likewise a car striking a pedestrian might not always result in a death.

Google for example patented a sticky car hood to protect pedestrians from “secondary impact” which is when a person is thrown off the back of a moving vehicle.

Going back to the situations mentioned earlier, these are projected to be rare occurrences, especially since autonomous cars are being programmed to balance practicality against completely following the rules of the road. This means instead of simply stopping in the middle of the road for an obstacle in the shoulder, the car would slightly move to the opposite lane provided it’s still clear.

Still not sure if you’re ready for the driverless car revolution? If you said no, you’re not alone.

TechCrunch mentions that a survey of 2,000 drivers found that 75 percent of respondents “would be afraid to allow an autonomous vehicle to drive itself with them in it,” while 20 percent were fine with the idea.

One of the leading concerns about autonomous technology is how these self-driving cars will work with pedestrians and other variables. Law makers also have to consider how autonomous cars will interact with modern hazard cones and other traffic equipment.

At this point and time, it doesn’t look like progress in the autonomous vehicle space is going to slow anytime soon. As far as the situation goes however it’s important to remember that the technology is still in it’s infancy and it has yet to be fully understood.

As with many other technologies, we’re currently in the infancy period where it’s hard to predict where things are headed. When you look at the SAE standards however, it looks like the modular level approach to autonomous technology adoption is the best way for stakeholders to balance safety and reliability against developing practical timelines.