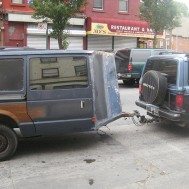 Of course you could argue every accident is preventable.

But some causes are so blatant, they defy human error. Take texting-while-driving, for example. That mistake causes over a million accidents every year according to National Highway Safety Association. Prevention is painfully simple – the driver should have put their cellphone away.

Too many accidents have nothing to do with the driver’s skills. Luckily, a little forethought can have a big impact on safety. When you’re driving, watch out for these:

A trailer can be dangerous if it’s not properly attached. Sadly, many drivers continue to use a rope or wait to replace the rusty chain on their hitch. The problem has become a growing concern among highway patrol officers. For good reason. It takes seconds for an unsecured trailer to pop off and wipe out everyone in the car behind.

Safety Tip: Make sure your tongue coupler is securely locked with a hitch pin. Use two safety chains, crisscrossed under the tongue. For full instructions consult the National Highway Traffic Safety Association’s Manual on Hitching Systems.

Nearly every cyclist in the city has had a close call, or a trip to the hospital, because of this one. Dooring – when a driver or passenger opens their car door onto a cyclists – is a leading cause of bicycle accidents. It’s a mistake to assume the biker is responsible. In most cases, a person who opens their door on a cyclists is fully liable. That can mean bike damages, hospital bills, lost wages and even the cyclist’s life.

Safety Tip: The space between your parking spot and the vehicle traffic lane is NOT a buffer. Most likely, it’s a bike lane. Before you open the car door, check behind your vehicle for cyclists.

Piling lumber, debris or equipment onto the back of a truck or strapping a load to the roof of your car is on par with lugging a trailer. Unless done properly, it can result in fatalities. The numbers are rough, but according to the United States Government Accountability Office (GOA), about 51,000 accidents and 440 deaths in 2010 were due to obstructions in the road. It’s assumed that many of these objects came from other vehicles. Hefty loads can also strain a vehicle and contribute to flats.

Likewise, throwing sandwich wrappers, empty bottles or other trash from the window of a moving vehicle is not only illegal – punishable in most states by up to $1,000 fine — its also the cause of approximately 25,000 accidents, according to the American Automobile Association’s (AAA) Foundation for Traffic Safety.