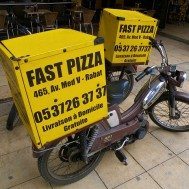 Are the customer service promises of big business placing us in danger?

Domino’s is one chain, known in the past for its quick delivery promises, yet they recently revised their approach, telling consumers the brand focuses on quality preparation rather than quick delivery.

Especially while out there tearing around the streets to make their deliveries, likely smashing hoards of parking cones.

Actually, Dominoes ended its ’30 minutes or less’ campaign years ago due to a lawsuit.

In May 1993, Domino’s paid $2.8 million to the family of Susan Wauchop, a 41-year-old Indiana woman who was killed by a Domino’s delivery driver. In December 1993, a St. Louis jury awarded $79 million to 49-year-old Jean Kinder after she was seriously injured by an 18-year-old Domino’s driver who ran a red light and collided with her vehicle.

The patience of Dominoes may be a positive for pizza tasters as well as road drivers.

Pizza delivery falls under a group that experienced 586 work-related deaths in 2009, or about 18 deaths for every 100,000 full-time workers.

America is not the only nation experiencing unsafe roads as a result of quickly-expected deliveries. Seoul, perhaps envying the Western world’s pace of consumption and variety of selection, emulates fast-food delivery, garnering traffic safety circumstances.

In 2009, there were 1,395, part of 4,962 injuries or deaths involving motorcycles in the restaurant and lodging industry during the past six years. And a recent poll of delivery drivers showed nearly 50 percent of those using motorcycles had indicated they had been involved in a road accident during the course of their work.

Quick delivery is big business for numerous brands; fast-paced drivers are not only bringing pizza and food, but consumer online orders.

UPS accidents are high, which could spell more traffic safety distress in the coming future, considering Wal-Mart and Amazon are two giants, both vying for the hearts of consumers who grow increasingly accustomed to same-day and quicker deliveries.

As the Journal relays, a number of Wal-Mart’s distribution centers are in PA and NJ, causing more traffic on roads and threats to traffic safety.

As Wal-Mart’s online orders rose, it turned to makeshift spaces to help handle the distribution load.

While those of us in the Eastern Pennsylvania and South New Jersey areas are no strangers to dense populations and high traffic, it’s amazing to discover two-thirds of the US population lives within 5 miles of a Wal-Mart, so drivers are not only rushing to drop off merchandise to the stores but also deliver to consumers.

Amazon and Wal-Mart are not the only retailers looking to quickly satisfy consumer desires with deliveries. Macy expects to soon have 500 stores addressing online orders (up from 23 in 2012 when the program began).

Have you had any negative run-ins with drivers in a rush or have concerns about increasing speeds and big delivery trucks on the road?

This one drivers relays a grievance to a Jimmy Johns:

While this driver was at fault, I believe your “Fast and Furious” delivery policy is just as at fault! This kid was so upset that I thought he was near tears and begged me not to report the incident for fear of losing his job.