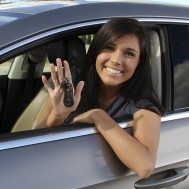 The number one danger facing teens in the United States is not drugs, abduction, or suicide — it’s car crashes. Over 3,000 teens die and many more are injured every year. Teen crashes happen with such regularity, in fact, the majority don’t make the news. This adds to a false sense of security among  eager young drivers and their busy parents. Yet, it doesn’t matter how smart, level-headed or responsible a teen seems, all young drivers are at a disproportionately high-risk of causing an accident. Safe driving is a combination of judgment, focus, muscle memory, and risk-management. Teens – who are still developing their cognitive functions — are at a deficit in all these categories. Of course, no adolescent is going to be eager to adopt extra rules. So how does a responsible parent help? Get involved. Teens who believe their parents are aware and care about their driving safety are less likely to engage in risky behavior. The more time a parent spends in the passenger seat and the more they talk with their teen about safe driving, the better off the new driver will be. It’s a double-edged sword. On one hand, allowing your teen to peruse a driver’s license puts them at an undeniable safety risk. On the other hand, coaching a teen on safe driving practices while they are still under your roof can set them up for life. Having a strategy and finding the right resources are essential for helping your teen stay safe as they enter adulthood. Promoting Parent Involvement in Teen Driving is a new manual from State Farm Insurance and The Governor’s Highway Safety Association (GHSA). It advises states governments on effective programing for parents of teen drivers. While ultimately concerned with public policy, this resource offers valuable insight for parents of teen drivers. To better protect your teenage driver, GHSA recommends the following:

Once they’ve started driving, teens are on their way to becoming adults. At least they think so. The best way to address safety – or any concerns for that matter – is to talk openly with your teen. A Parent-Teen Driving Agreements (PTDA) can be a great resource for structuring that conversation. PTDAs outline legal and household rules as well as additional responsibilities – such as paying for gas and insurance and keeping the car clean. The document should also contain consequences for violations and conditions for driving privileges. Organizations including the Center of Disease Control and Allstate Insurance offer basic PTDAs online. The trick, however, is to treat the contract like, well, a contract. Although guidelines should comply, at minimum, with state Graduated Driver’s License (GDL), parents are encouraged to engage teens in the process of deciding rules and consequences.

2. Know the risks and set a good example.

Most parents believe drunk driving is the biggest threat for teens. It’s not — teens are much more likely to text while driving (TWD). Likewise, having another teen passenger increases the new driver’s chance of accident by 50 percent. Three or more passengers increases the risk times four. If you don’t want your kid using a cell phone while driving, don’t do it yourself. Teens aren’t likely to observe safe driving practices if their parents are violating the rules. Unfortunately, parents aren’t always the best examples of self-aware driving. One way of managing this is to invite teens to “rate” the parent’s performance. It can be a tenuous practice, but teen evaluations have two benefits: They spark conversations about safe driving practices and they remind parents that their kids are watching. (See PRIDE Program)

All states now require young drivers to matriculate through a GDL Program. This includes an intermediate phase – after passing the driver’s test – where unsupervised driving privileges are limited. Th restrictions address high-risk situations such as cell use, night time driving, and passenger transport. In New Jersey, teens must also add “new driver” decal to their car. (A state-by-state GDL list is available here) It’s estimated that GDLs have contributed 20 to 40 percent of the overall 5 percent drop in teen driving accidents. Still, parents are encouraged to treat GDLs as a minimum requirement. New drivers should be accompanied by a parent or guardian for 1,000 to 1,5000 miles — in varied conditions – before they are considered competent. Because it takes between three to five years to gain adequate exposure and muscle-memory, parents are encouraged to continue driving with their teen for two years after they’ve gained their license. The first 30 to 90 days are the most critical for accident prevention.

No teenager wants to feel like their parents are spying on them. Still, new technologies that monitor a new driver’s behavior can be effective in promoting better practices. State Farm Insurance, in partnership with The National Highway Traffic Safety Administration (NHSTA) recently released Driver Feedback, an app that monitors and reports abrupt acceleration, deceleration and swerves – classic “choppy” driving that’s common among new drivers. When presented as a tool for improvement, Driver Feedback can be quite effective in helping teen drivers gain self-awareness. Teen Safe Driver Program, offered by American Family Insurance (AFI) installs internal car cameras at no additional charge. Professional driving coaches evaluate the footage on a confidential website that parents can access. According to AFI, teens enrolled in the program have a 70 percent decrease in risky driving behavior and 96 percent increase in seat belt use.

Only three states require parents to complete an educational program as part of their teen’s GDL. Yet many offer volunteer in-person and online educational programs (pediatricians are also a good resource—ask your child’s doctor what you can do to keep your teen driver safe).These opportunities are invaluable for exposing the realities of teen driving, establishing best practices, and offering support to parents. A complete list of recommended programs is available at GHSA’s Promoting Parent Involvement in Teen Driving.   Image source: State Farm on Flickr, http://www.flickr.com/photos/statefarm/
(Visited 993 times, 1 visits today)