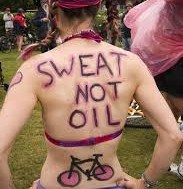 “I’d prefer to have gym class last.” I wanted my high school counselor to modify my class schedule, so gym class would be later (preferably very last) rather than in the morning. I was a high school student concerned with appearance. Can you relate to such human tendencies? I notice a number of Philadelphia peers biking to work, some trailing a load of perspiration (and odor) with them. While engaging in athleticism should welcome perspiration, we don’t want to sacrifice comfort in the end. A new clothing line thinks it has offered a solution to the people. Form follows function. The Romans knew it. Bicyclists and business people alike had to realize the inconvenience of being both an avid cyclist and person profusely sweating upon arrival to work, but the old and modern world had not collided on the sentiment until now. Are you dressed right for work, cyclists?

You’ve noticed your numbers rising, especially in metropolitan and green-minded areas, such as Philadelphia, where many workers peddle their way to work,

avoiding the dependence on motor vehicles, as well as minding green efforts to maintain a healthy environment.

Thanks to innovation in clothes manufacturing, cyclists may not have to fear the multi mile ride to work, impending perspiration, and its socially-awkward associations (such as body odor). Ministry of Supply uses an aerospace design, tracing the body’s alignment in keeping wearers cool (and possibly free of perspiration).  The difference between their design and that of current athletic gear is keeping the body cool versus maintaining sweat (the pursuit of gear to date). Some of the material used to create the cooling effect is used by NASA in its pursuit to regulate astronauts’ body temperatures.  Computerized knitting is leveraged to achieve the desired result, targeting specific areas of the body that are more likely to attract perspiration.

However, the brand understands it must strike a balance between fashion and function.  At one end of the spectrum, the clothing parcels must do as promised, keep riders cool.  However, the ‘value’ of the product is also contingent on its fashion appeal. “If it doesn’t look good, it’s over,” observes one owner of a high-performance clothing brand.  The entrepreneurs of the cycling apparel relied on customer feedback before official release last June. “We did more than 20 iterations of the dress shirt, and we were progressively able to improve the aesthetic,” remarks one of the founders. What’s the company’s mileage of success looking like to date? 12,800 shirts have been sold via the website and Boston showroom.  Craig Breslow, an early fan of the clothing and pitcher for the Red Sox, invested $50,000 toward the company, celebrating the brand’s ability to identify and execute on a common cyclist and human issue. Biking to work is popular in Philadelphia and greater Pennsylvania.

Now, we can do it at a cooler pace. Image Source: FogCityJournal.com
(Visited 279 times, 1 visits today)
Older Posts