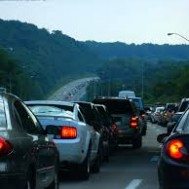 If you’re one of millions of commuters in the United States, this image is too familiar. Luckily, the data we need to solve traffic problems already exists – it’s in the GPS trackers on our phones and cars and the sensors along our highways. Researchers at the Center for Urban Transportation Research (CUTR) at University of South Florida (USF) are developing new ways to synthesize these location-based sources to improve transit efficiency. Their recently patented research on real-time traffic path prediction and automated incident alerts makes better use of 511 roadway announcements by anticipating the user’s travel. Here’s how it works: A user registers online and the system starts tracking their daily trips to and from work, weekly trips to the grocery store, and other commutes. It uses this information to predict the user’s routes and routines. Instead of an excess of 511 reports, the user only gets necessary alerts during their time of travel. “It filters out a lot of these irrelevant 511 alerts that are going to users that really don’t have anything to do with their current position,” says Sean Barbeau, Principal Mobile Software Architect of Research and Development at CUTR. There are a few key differences from Google Navigator and other travel apps. Instead delivering drivers to a destination, real-time traffic path prediction accommodates their daily and weekly travel patterns – trips where directions aren’t necessary. It also sources updates directly from the local 511 system, which is fed by highway sensors. Most travel apps, by contrast, rely on user updates. The research received funding from the National Center for Transit Research and the Florida Department of Transportation.  It’s one of the location-based innovations being developed at USF’s Location-Aware Information Systems Laboratory (LAISL), a multidisciplinary research department founded in 2003 that combines computer science and engineering with transportation planning. LAISL also researches local transportation patterns used to advise better roads and transit systems. They’ve worked with University of Washington to bring Tampa and Atlanta OneBusAway – an app that delivers real-time transit arrivals. Travel Assistance Device (TAD), an app LAISL designed for people with intellectual disabilities, has received accolades from the U.S. Department of Transportation. This technology recognizes the user’s location on a bus route and tells them when to “pull-the cord” and exit, overcoming a critical limitation in their use of public transit. “We now have the technology and mobile applications,” Barbeau says. “There’s a lot more opportunities to work in the [location-based services] space and provide solutions to transportation problems that are fundamentally computer science problems.” Top Image: daveynin, Flickr creative commons
(Visited 307 times, 1 visits today)