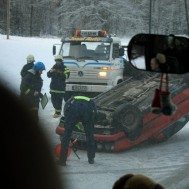 The Story: The Washington Post called it “traffic anarchy.” During an infamous 2011 snowstorm, northbound commuters trapped on the George Washington Parkway without food or water got so desperate some hopped the medium and wove through opposing traffic. Others simply abandoned their vehicles and started walking. The interstate, marred with black ice, fallen trees, and snow-trapped 18-wheelers, held travelers captive for nearly 13 hours. Unable to find a bathroom, people relieved themselves on the street. The Culprit: Multiple-accidents. On slippery, high-use highways, a driver doesn’t just slide into the next car — he sets off a chain of crashes. Rescue cars and snow clearing vehicles add to the delays. How to Avoid Winter Gridlock:

The Story: First it’s the snow, wind and sleet. Then come the emergency calls. During a recent storm in Baltimore, Maryland, the American Automobile Association received up to 1,000 calls in a single hour – mostly from drivers who couldn’t start their car. In rural Indiana, Rigo and Claudia Garcia were rescued by a local farmer after their vehicle drowned in a snow drift. It took the rescuer over three hours to clear a path and pull the couple to safety. The Culprit: Unpredictable driving conditions. The volume of snowfall is up to 10 times the volume of rain. Once it starts falling, it can trap an object in minutes. Drivers in warmer climates are also more vulnerable to engine failure during the rare cold-front because they haven’t developed wintertime maintenance habits. How to Avoid Getting Stranded:

The Story: When Darrell Grant of Stamford, Connecticut got stranded on a snow bank, he did what seemed reasonable. He made an emergency call, turned on the heat, and waited to be rescued. Then he died from carbon dioxide poisoning. The Culprit: Frozen tail-pipe. Snow slid from the bank into Grant’s exhaust pipe and clogged it, forcing the lethal, odorless fumes back into the enclosed vehicle. How to Avoid Carbon Monoxide Poisoning:

The Story:  In Portsmouth, New Hampshire the driver of an SUV “rolled-over” and hit a tree after skidding over compacted snow.  Snowfall was light that day and he was traveling at the speed limit. The Culprit: Overconfidence. State police frequently note drivers who cause accidents during the winter are usually driving large, 4-wheel-drive equipped vehicles. Winter-ready mechanics cannot replace good driving habits and even light snow can be treacherous. How to Avoid an Accident:

The Story: Drivers in Saint Louis Missouri found themselves walking to work after their cars were buried in plowed snow. The problem got worse as the weather warmed. The Culprit: Urban avalanches. Plowed snow can pile high on narrow city streets. Once it reaches a certain height, it starts to fall back into the road and onto parked cars. How to Avoid getting Plowed-In:
(Visited 311 times, 1 visits today)