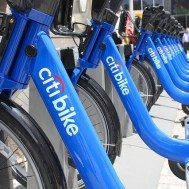 “Billed by city officials as the first new wide-scale public transportation option in more than half a century.”

If you’re Philadelphian, you don’t envy New York baseball or their accents; we have our own, yet we do have a right to envy New Yorkers this week for their application of a city-wide bike sharing program. The green and healthy movement begins Monday, involving 6,000 bikes strewn across Manhattan and Brooklyn. Mayor Bloomberg was not alone in his vision of a city less polluted by cars and noxious fumes but rather professionals and leisure seekers alike using bicycles for short-term trips. Cycling increased in popularity within NYC limits:

Philadelphians eagerly await the city’s overall and individual user reception of the program.  It’s likely to assume a well-celebrated implementation would spark the possibility of spreading in other municipalities. However, with great cycling power comes responsibility of sharing the road. What’s the likelihood of a few feuds erupting on city roads?  It’s common around the world.

One motorist immediately regretted her interaction with a cyclist on the road, angering other cyclists and advocates of safety.  Whether you’re biking or riding a car, it’s important to share the road. New York’s cycle share program takes ideas from other programs from around the world, including those in Europe.  Here, one city expresses its steps for ‘considerate driving.’

Sharing the road is our right, but it warrants attention to traffic safety.  One official warns that helmets should be a requirement of the new program, yet the city notes that such requirements deter users.

According to statistics, only 35% of cyclists admit wearing their helmets for all trips.  While, New York’s new share system targets short-term usage and mileage, traffic safety is always commands attention. Annual memberships for the bicycle share system starts at under $95, and a Times article thoroughly addresses related questions and answers. Philly loves its cycles, and a number of enthusiasts await to observe the interplay of drivers and cyclists.  Some observe how misunderstandings or ‘myths’ about cyclists fuel debate between them and drivers.  The misconception of ‘road tax’ is one standing gripe.

What’s your forecast of New York’s new program.  Will this be a first-hand revolution or city-wide flop?  Are officials too optimistic, assuming cycling will increase in popularity through time?  Is the logistics of Manhattan and Brooklyn too congested for this to work properly?  Would cycle share work better in Philly?