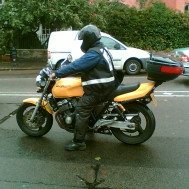 Ask any official what will make roads safer for vulnerable users and “education” invariably tops their list. That’s a funny term because dangerous driving is rarely addressed through a curriculum. More often, officials are actually referring to public awareness campaigns — i.e. billboards, TV ads and web content that battle for public attention. Thanks to the Nathan Bower Act, signed in October, Michigan driver’s ed courses are now required to address bicycle and motorcycle awareness. The new law pays tribute to a young motorcyclists of the same name who died in a car collision. Many advocates, including John Lindenmayer of the League of Michigan Bicyclists, are celebrating Nathan’s law as a “great step forward” in the rights of vulnerable road users. But there are reasons to demand more. Fewer teens are enrolling in driver’s ed courses. Furthermore, while Michigan’s cycle-commuting rate remains below the national average (Census 2012, American Community Survey), the state’s traffic safety record is pretty dismal – 27 of the recorded traffic fatalities and nearly 1,500 injuries were bicyclists in 2013. The law does little to reverse those numbers. Real change looks more like House Bill 4792, a proposed state legislation that passed unanimously in committee but has yet to reach the floor. The bill would make it possible to charge an at-fault motorist with a crime if they cause bodily harm to a vulnerable road user. That means motorcyclists, bicyclists, pedestrians, wheelchair-bound persons, and tractor operators traveling in the road, would enjoy the same legal protection as highway construction workers. Currently, Michigan’s traffic laws are like most in the U.S: The only potential legal recourse for killing a vulnerable road user is a traffic ticket. If we are truly committed to safer roads, law makers must move forward on this kind of policy reform. In the meantime, Nathan’s law does something motorcyclists and cyclists have been demanding for years — it acknowledges they have the right to be there.
(Visited 183 times, 1 visits today)